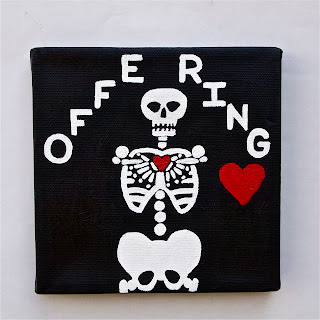 What I mean can be most clearly seen through the product of this journey;
my body of work Rivers. They went from rivers, to altars and are now coming back to rivers again.

When I went to CIIS it was through the Women’s Spirituality Dept for a MA in philosophy. Alongside this program I signed up for the Certification in Sound Healing that was also offered through the school. I found that they were very complimentary programs to take at once. WS was walking me through the roots of embodied spirituality and SH was giving me a basketful of practical tools and perspectives to express this wisdom with. Both programs were centered around opening your voice, connecting to your heart and grounding your energy.

When the MFA program showed up at my school (it jumped over from another school that had to shut its doors) I reached out for the opportunity to claim my artist side as I was realizing that is where my passion would be best contained. I had been balancing between mystic and healer and found my voice to be coming out in colors.

I had been an abstract painter for a long while and used the chance of this MFA to push my work into devotional paintings of rivers using their maps as a framework for my creativity. It was an idea that was dancing in the back of my mind for a while and after a few stops and starts it became clear that this river metaphor was going to be the center of my work.

I wanted to keep the themes of embodiment and sound healing prominent in whatever my work was because it seemed so clear at the time that the spiritual philosophy behind these two ideas was something that was very important for me to express. So I took my paintings of river and turned them into altars using text on the sides of the canvas, a shelf of found objects and a sound drone to create a sense of sacred space.

And it worked. Or it was at least in the beginning stages of working. I love the altar and drone idea and had a beautiful time contemplating and allowing them both to come into creation. It was what I needed at the time to really feel myself growing as a artist and a person. It helped me to build a bridge between my multiple personalities of artist/healer/mystic/woman/musician/person where I felt like I could share all those pieces at once.

But now I have decided to take the altars off of the rivers and let their waters flow a little more free. Moving into post-grad school life has been a time of practical building and extreme patience. I moved to New Orleans with the intention of working towards getting my massage certification moved here. This required me to take an anatomy class to get 5 more hours in training to meet state standards, take an exam, pass a few background checks and send lots of money to the state.

It took longer then I expected but is finally over and I may start renting space at a yoga studio soon…more info to come!!!

Art wise I decided to lay low and see what happened naturally.

I finished two more river paintings during my transitioning phase into New Orleans and then decided that I will not do any new Rivers until 2014 as I needed space to figure out what to do with them. (I haven’t share pix of the two new paintings….but I will soon).

I was able to get a few of my rivers in a group show at the Big Top Gallery which was a wonderful event to be part of. They also let me into their pop-up gallery in the Voodoo Music Fest which happens here around Halloween. There I sold some of these little skeleton with hearts paintings that I had started to do during my anatomy class to keep my hands busy.

This experience gave me the confidence to make them the center of my work once I was able to start selling my art in the French Quarter on Pirates Alley right after Mardi Gras ended. They have been a good hit with the touristing public. My friends and family have also been giving them alot of love as well. 🙂

Ive kept trying to write about the River altars but its been a struggle for me to explain what is going on it them. Then I realized that going forward I want them simply be rivers as they already represent a layered spiritual discussion without me having to build altars around them. That energy can be better applied to my writing, healing practice and the eventual workshops that I will run.

So that is where I am at right now.

Im also working out how to blog. For a minute I was going to write every weekday but I know that that is above my commitment level. But I do believe I can pull off 3 days a week of sharing my insides with the outside.

The themes I will be focusing on are:

Art I Like – Influences and Inspirations –
River Research – Maps, Charts, Imagery and Reflections –
My Practice – Self Reflections and Other Musings –
Holistic Health – Tips, Tricks and Practices –
Sound Healing – Chants, Tones and Vocal Meditations –

Id love to hear if any of you have had any major shifts in your life/work lately.