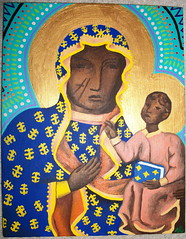 I was assigned to do a peice working with symbols that relate to my ancestry.  My father’s family traces back to a town near where the Black Madonna of Czestochowa is kept.

(text below taken from http://en.wikipedia.org/wiki/Black_Madonna)

The origins of the icon and the date of its composition are still hotly contested among scholars. The difficulty in dating the icon stems from the fact that the original image was painted over after being badly damaged by Hussite raiders in 1430. Medieval restorers unfamiliar with the encaustic method found that the paints they applied to the damaged areas “simply sloughed off the image” according to the medieval chronicler Risinius, and their solution was to erase the original image and to repaint it on the original panel, which was believed to be holy because of its legendary origin as a table top from the home of the Holy Family. The painting displays a traditional composition well-known in the icons of Eastern Orthodoxy. The Virgin Mary is shown as the “Hodegetria” (“One Who Shows the Way”). In it the Virgin directs attention away from herself, gesturing with her right hand toward Jesus as the source of salvation. In turn, the child extends His right hand toward the viewer in blessing while holding a book of gospels in His left hand. The icon shows the Madonna in fleur de lys robes.

In Vodou, it is believed that a common depiction of Erzulie has its roots in copies of the icon of the Black Madonna of Częstochowa, brought to Haiti by Polish soldiers fighting on both sides of the Haitian Revolution from 1802 onwards. In her Petro nation aspect as Erzulie Dantor she is often depicted as a scarred and buxom woman, holding a child protectively in one hand and a knife in the other. She is a warrior and particularly a fierce protector of women and children. In Santeria, this image is referred to as Santa Barbara Africana.

Posted in Art, blog, Life, MFA and tagged acrylic, goddess, inspiration, myth, shamanism, witchy
← This is one of the women I am studying with.Artists Don’t Apologize: An Inquiry Into Artistic Identity →

This site uses Akismet to reduce spam. Learn how your comment data is processed.